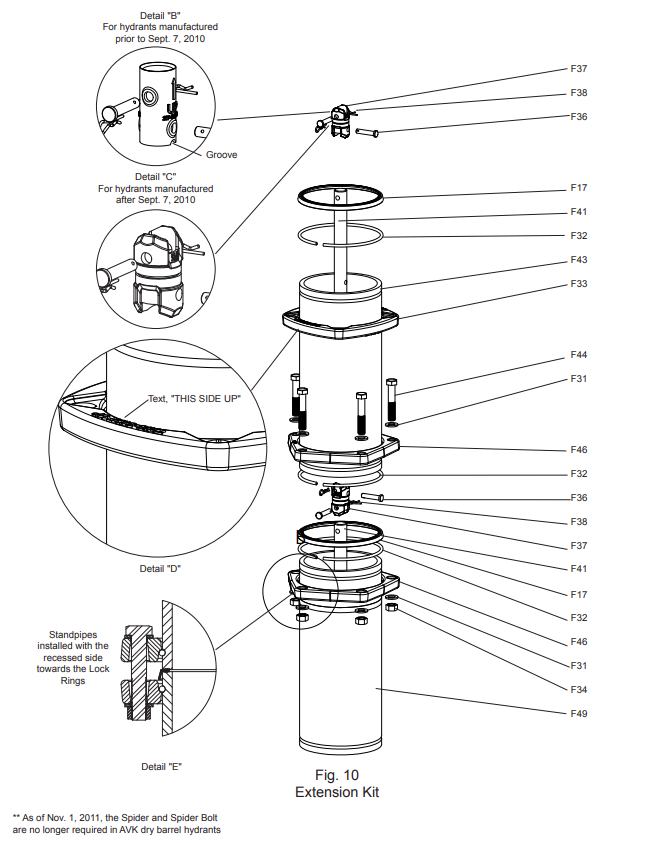 Watch the webinar explaining the step by step process

EXTENSION KITS: Fig. 10
American AVK Hydrants have the capability of adjusting the Lower Barrel to the proper height due to changes in the
finished grade. Extension Kits are available from 6” to 90” in 6” increments. ( Longer upon request)

WARNING: On a partially disassembled hydrant under line pressure, pressing down on the stem could force open the Main
Valve (F61) and allow it to slam shut, creating a water hammer. If the intention is to remove the Main Valve (F61) first locate
and be sure the supply valve is closed. Relieve the pressure on the Main Valve (F61) by momentarily opening and then closing
the hydrant.

The installation is performed as follows:

2. Remove the Lock Plate Retaining Screw (F3) and Lock Plate (F4) with a 7/64” or (3mm) hexagon key. Note: Older
hydrants may be equipped with a set screw instead of lock plate. Remove the set screw and set aside for later use.

7. Remove the Barrel Gasket (F17), and inspect it for damage. If damaged, replace.

16. Place the Extension Barrel (F43) onto the Lower Barrel (F49), making sure that the Barrel Gasket (F17) stays in place.
Slide the Standpipe Flanges (F46) until rest against the Lock Rings (F32).

21. For hydrants manufactured after Sept. 7, 2010, the new style stem rod coupling is used and there is no orientation
requirement. (See “Detail C”)

23. Carefully place the Nozzle Section (F29) on top of the Extension Barrel (F43) so that the Barrel Gasket (F17) is not moved or damaged

24. Slide the Breakable Flange (F33), against the Lock Ring (F32), (See “Detail D”) and align with the holes in the Upper Barrel (F35). Reinstall the Bolts, Nuts, and Washers removed in step 6. NOTE: For series 27 dry barrel hydrants manufactured after Feb. 18, 2011, hydrants with buries from 3′ to 7′ include Hydrant Bury Tags (F94). Extension Kits up to 4′ also include an Extension Bury Tag (F95). ( See “Detail A”) for installation locations. Tighten just hand tight.

25. Clean the top of the Upper Barrel and place a Barrel Gasket (F17) on top.

27. Rotate the Modern Nozzle Section/Upper Barrel to align the nozzles to the desired position. Take care not to displace the two Barrel Gaskets. Tighten the nozzle section bolts connecting the Lower Barel to the Breakable Flange to 80 Ft. Lbs..

28. Using the socket portion of the AVK T-wrench, reinstall the Stop Nut (F11). Spin the stop nut down until it stops, and then snug it about 1/4 turn tighter.

30. If required, refill the lubrication reservoir in the Modern Nozzle Section (F29), reservoir with a food grade oil or grease that contains no acetate or silicone.

32. Verify that there is a Lubrication Hole Seal (F9), installed in the threaded hole on the Operating Nut. Replace if missing.

34. Lightly grease the Thrust Nut O-rings (F5&F7), and reinstall the Thrust Nut (F6). Tighten the Thrust Nut until it is just snug against the Anti Friction Washer (F8), then back off the Thrust Nut 1/8 to 1/4 to the first location at which the Lock Plate (F4) can be installed. NOTE: DO NOT OVER TIGHTEN THE THRUST NUT (F6).

35. Reinstall the Lock Plate (F4) and Lock Plate Screw (F3). On hydrants with equipped with a set screw, back off the thrust nut until the set screw can be reinstalled.